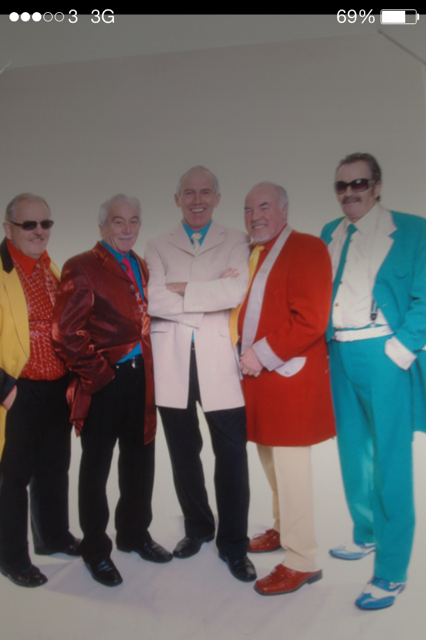 That`s how the showbiz columnist of the Belfast Telegraph describes Bee-Bop-Gold in his review of one of their Northern shows. The visual side of the band`s act plays a huge part in their overall performance. “They have over 50 stage suits, each one is immaculately tailored. They are five Gentlemen of Rock, look and behave accordingly, this focus on presentation and professionalism is one of the reasons BBG do so much corporate work, he continued. They are also in great demand on the corporate circuit because they can be relied upon to handle these prestige engagements with no problems, they are a totally professional outfit and I am proud to represent them.”
The band formed 1987 by Bob Murphy and the late Johnny Fetherson, Bee-Bop-Gold began as a group of guys who loved Rock and Roll, getting together, playing the old songs and having a laugh. Well, it wasn`t long before public demand changed all that. Quietly and without fuss they built a strong fan base, and very soon were playing the top venues around the country. Pressure of work brought about some changes in personnel, but the lads kept going, bringing their own distinctive brand of good time Rock`n Roll to audiences across the land.
In 1995 John Fetherson sadly died. John was one of the founder members of Bee-Bop-Gold and the main driving force behind their early success. His loss, both as a friend and colleague was tremendous, and for a while the rest of the guys were unsure whether or not to continue. The great support they received from their fans made them realize they had to carry on, and the rest is history. A chance meeting brought about a new and exciting chapter in the BBG story. The boys were appearing at a Rock`n Roll festival in the summer of 1997 and were very impressed by the band the organizers had hired to back them. Lead singer Sammy Morgan takes up the story, “it felt we had been together for years, the chemistry was immediate says Sam. “We talked after the show and soon discovered we had so much in common, that it seemed the most natural thing in the world to join forces and create the Bee-Bop-Gold Rock`n Roll show. Thanks to a lot of hard work, and through a lot of incredible support from our fans, it has been a terrific success, and the funny thing is we`re a still a bunch of guys who love Rock `n Roll. Lots of rehearsal and new ideas brought by the band have turned us into a slick professional outfit and we`re looking forward to even more success in 2017.