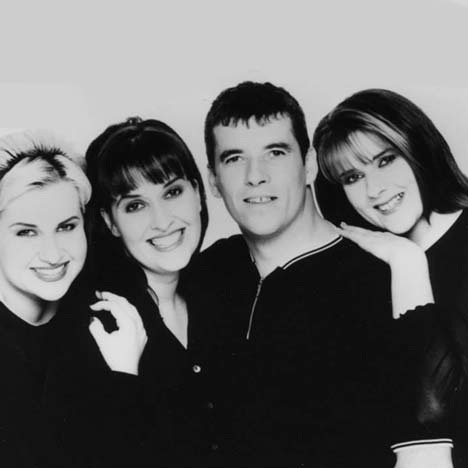 A powerful live act, mixing dance with disco -soul and great vocals. Who’s Eddie are the Molloy family three sisters and one brother, with backing band.

Who’s Eddie are primarily a family band, made up of three sisters and one brother, Keith, Jacqui, Orla and Dara Molloy. They have been working in the music business since their childhood, singing their way from northern Greenland, to the southern tip of South Africa. There are very few countries that haven’t experienced “WHO’S EDDIE?” with Germany being one of their biggest successes to date on the “live scene”. Not only do “Who’s Eddie?” enjoy huge club success, but the band have had no less than 3 top ten hit singles in the national charts, as well as supporting Rod Stewart, Belinda Carlisle, East 17 and Boyzone to name but a few. The 12” single of one of their hits, “Take me up”, was serviced to DJ’s all over “clubland” in the U.K., and it received only one reaction, “top tune”. The track also went to no.5 in the Dance charts in the U.K. Their live show is not only “high energy” but also power packed with live vocal performances, and has also been acclaimed as: “A force to be reckoned with!” More recently, Keith co-wrote and produced “We’ve Got The World Tonight!” for Mickey Harte in last years Eurovision Song Contest. Not bad for a family band! Watch this space!